I have been continuing with more benchwork for the upper deck above the storage yards and towards Kankool.

After the first section was installed, I decided to build the corner section.  This consisted of a section back into the corner then another section at right angles above the storage yards. 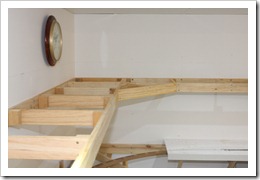 Once the corner was in, I then proceeded to make four more modules and attach them along the wall towards Kankool. 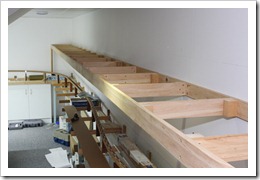 The last module is currently supported by a temporary post until the next section is installed above Kankool.  I found that once a module was secured to an adjacent one, the whole structure stiffened up and the ‘springyness’ was reduced, especially in the corner.

The next two sections above the storage yards were built and attached.  As can be seen from the photos below, I have made the upper deck follow the edge of the storage yards, as I needed to maintain maximum aisle way clearance here at the peninsular.  Besides, the only scenery in this corner will be a huge hill that the tunnel dives into.

As the upper deck sections proceed along above the storage yards, they will reach a maximum depth of about 800mm and will need to be supported by brackets.  In the photos above, the depth increases from 420mm to 600mm, with the next stage as shown in the drawing below pushing out to 800mm.  So, simple brackets were made from 1×2 DAR and installed at a 45 degree angle, with the base lifted up around 60mm to allow for the loading gauge of the rear storage road. 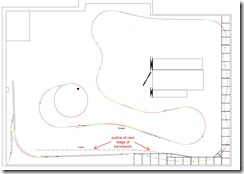 I am going to try and complete the upper deck above the storage yards at least up to the start of the corner, which will require some substantial supports.

Over the last few weeks, I had started thinking about how I was going to support the upper deck benchwork from Chilcott’s Ck through and past Kankool.  After reading recent posts on a few other blogs I follow, as well as on the Model Railroad Hobbyist magazine forums, I decided to have a go at using open grid framework, self-supported off the wall.

I had always planned to give the steel shelf brackets another go, but I was always worried about the bracket being visible in the lower deck’s viewing area.

Since the upper deck in this section will only be around 500mm deep, I thought that an open frame could support itself off the wall without the need for additional supports.  This would leave the underside free of anything that would encroach into the lower scene.

The depth of the upper deck was a bit of a guess at this point, as I still haven’t finalised the depth of the lower scenery yet, but I hope to have it no more than a maximum of 450mm deep on this first run up to the corner before Kankool.  The upper deck needs to be slightly deeper than the lower level to allow for the lighting to fall on the front of the scene, therefore I decided to make the minimum depth of the upper deck grid at 460mm, as this would allow me to pack the front edge out as required for the fascia/valance to around a maximum of 520mm, which would give an upper deck overhang of 70mm. 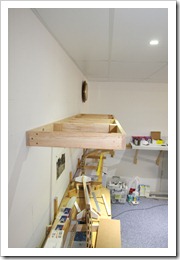 So, the frame was glued and screwed together with blocks in the corner of each cross-member.  It was then screwed to the wall studs with large decking type screws.  The resultant structure is quite strong and seems to support itself pretty well.  After all, it only has to support the roadbed, scenery, lighting and of course the trains.  It won’t be susceptible to having people leaning on it, which would require more supports.

I had to also decide how far below the upper level roadbed height I wanted the framework.  It’s always been hard to envisage how much scenery I wanted below track level in certain areas, but I came up with the magic figure of 5.5 inches.  This would give me 40 HO scale feet below track level, which is a fair bit.  In some locations where I feel I don’t require such a depth below the track for scenery, I may lift sections closer to the 70 inch mark to keep a good lower scene viewing height.

The two pictures below show the frame in place with the red arrow pointing at the 70 inch top roadbed height datum.  In the larger picture, the line on the wall may be visible. 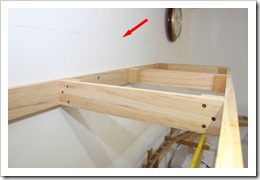 This gives a 19.5 inch vertical height to the lower deck scene/roadbed.  This, of course, is based on this location (bridge), but will decrease as it progresses along the lower grade.

I will probably fit another two 1800mm long sections in along this wall, before I have to make a corner module to then proceed above Kankool.

Similar sections will be built above the storage yards for the Ardglen section.

I am also thinking of employing this same technique for the upper valance support structure above the upper deck.  It will only have to support itself and lighting.