Scenery is progressing slowly at Temple Court.  Lots more cutting and carving of the foam has happened, creating even more mess!!

It was time to think about applying the final coating over the foam to fill in the gaps and finalise the landform.

Now, I could have gone the plaster and paper towel route, but this to me is very messy and you only have a short working time with the plaster before it starts to set.

About two years ago, I purchased a series of online DVD’s from Model Trains Video which is an arm of Model Railroad Hobbyist magazine.  The two DVD’s were produced by Mike Confalone and documented how he had gone about making the scenery and specific scenes on his HO scale Allagash Railway.  Click the image below to go to the site.  Google is your friend if you wish to find out more about the Allagash.

Whilst the series is ultimately how Mike did the scenery on his own layout, and the content is based on US prototype railroads, the techniques can be applied to any layout modelling.

In one of the DVD segments, Mike demonstrates how he makes a “mud” concoction to use as a ground cover base.  It’s a mix of a product called “Celluclay”, water and latex (acrylic) paint.  The Celluclay is a papier mache product which sets hard once dry and can then be sanded, filed etc to shape.

After watching the videos, I tried to find this Celluclay.  It’s certainly available here in Australia, but it’s quite pricey, and being a dense product, quite heavy to post.

Again, Google was my friend, and I came across what appears to be an identical product called EC Sculpt-it.  Well, after more searching, I came across a 10kg bag of the stuff being sold by Officeworks.  It was only available as an online order, but I was able to have it delivered to my local store for free pickup.  Here it is on the Officeworks website.  At $55 for 10kg, it’s certainly cheaper than the equivalent quantity of Celluclay.

Below are some shots of the area prior to applying the “mud”. 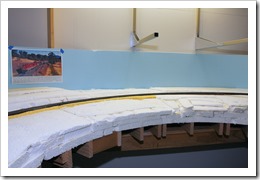 I decided to mix up a small, initial batch of the “mud” as a test, but just used water only with the Sculp-it.  Well this didn’t turn out so well, and I probably made it too wet, and wasn’t all that easy to apply.  It did however harden in about 45 minutes.

For the second attempt, I decided to mix some acrylic paint with the Sculp-it.  I found some very old paving paint in the garden shed and decided to try that.  It certainly mixed better and made into a nice paste, but again, I probably made it too wet, as it seemed to take overnight to dry.

I then decided to look at Mike’s video once again.  I discovered that he adds some water to the dry stuff first, then adds the paint.  There is no hard and fast mixing ratio, but after having a third attempt, I came up with a good mix.

I use three good handfuls of the Sculpt-it, probably about 100ml of water, then add the paint until a thick consistency is achieved.  It needs to be thoroughly mixed so no dry product remains.

The photo on the left below shows the dry product and the right hand photo shows the resultant “mud”. 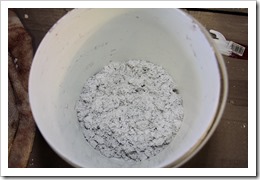 Prior to starting with this third batch of the mud, I decided to attach the first section of fascia so I could bring the mud right up to the fascia edge.  I used an offcut of 1/8” masonite that was left over from cutting the spline material.  It was 2400mm long by about 230mm wide.  This was temporarily held in place and a rough line drawn on the inside following the foam contours.  It was then cut out with a jigsaw, placed back in position and screwed to the joists.  The screw heads will be filled and sanded later.

Then came the fun part.  The mud was worked into the foam with one or two fingers, smoothing out regularly with a light spray of water on top.  The photo below shows my stepson, Connor, helping me out! 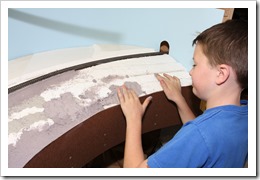 The mud was brought right up to the fascia edge and also up to the roadbed and shaped appropriately.  By now I think I had the right mixture and technique happening.  It was dry to the touch after a couple of hours.

The photo below shows the first section complete.

I’m still not sure whether to continue covering all the foam, or just use it to fill the gaps and make contours where needed.  It’s certainly going to use up a lot of mud if I am to completely cover the foam.  What you see above has used 2kg of the dry Sculpt-it.  I have read that either sawdust or Vermiculite can be used 50/50 with the Sculpt-it to make it go further.  I might try this with the next batch of mud.

I have also been making some rock castings from plaster in some borrowed moulds.  These are planned for a short section just to the left of the printed picture in the photo above.  The image below shows what I hope to achieve in the scene.  More on this in the next post. 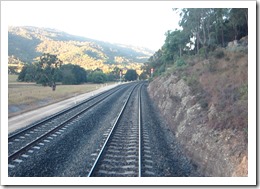 Now that I have this first section of scenery done and the fascia in place, I really like how the scene is progressing.  I will now continue with the mud behind the track, probably up to where the rock castings will go.  Stay tuned!

Since the last post, I have been busy making more mess with styrofoam!!

I started applying layers of the foam to build up where I wanted hills, cuttings and embankments.  This was a pretty slow process actually, as it’s very tricky to fit square foam pieces into a curved area.  There is a lot of cutting!!

Below is a series of photos showing progress so far.

The section above includes the formation of the old line to the shale oil works at Murrurundi which I described here. 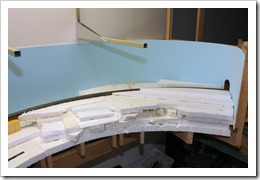 The two photos above show some of the high density XPS foam I purchased from Bunnings.  For those of you that follow Railpage, there is a thread on the stuff here.  It was easy to cut into strips and then kerf to allow it to follow the roadbed easily.  The bamboo skewers help hold the foam in place while the adhesive sets.

Here I have started to carve an embankment into the foam.  This is only a rough formation as the final shape will occur with plaster sculpting.

An overall shot showing the formations.

I am certainly enjoying this part, and the scene is taking shape, but it is difficult to visualise what the scene will look like, as well as trying to copy what I see in the photos.

This week has seen me make a start on forming the scenery in the Temple Court section.

So I dragged out some polystyrene foam I had been collecting over the years and worked out what I could use.

I had some 30mm thick sheets about a metre square that would do the trick, along with an assortment of various shapes and sizes.

The foam is cut to shape and glued to the joists with water based construction adhesive, with additional timber supports installed where required.  The next stage is to use some high density XPS foam to build up the areas that will require carving away.

The section on the far left will probably end up being a low cutting to help disguise the ‘rat-hole’ in the backscene.

The section near the centre of the photo will be a rocky outcrop based on the prototype as shown below.