I also did some more work on the recently completed handrails for the platform at Kankool.

They were given an initial spot of weathering then attached to the platform using superglue.

I’ll probably do some further blending using the pan pastels.

The edge of the platform timbers on the rail side were also given a dry brush of white paint.

Over the last few weeks I have been working on applying scenery to a small diorama I initially made a few years ago. Up until now, it had just been sitting around with track ballasted but no scenery.

So out came the scenery dirt and static grasses. Still a work in progress as I am yet to finish the road. I was trialling different techniques to produce long grass. Basically, the first layer is 2mm fibres applied into Mod Podge glue. When that has dried, 3M Super 77 adhesive spray is applied over the top then a mixture of 4mm and 6mm fibres is applied over the top. Different colours are mixed together to get away from a uniform colour. Additional grass tufts, weeds etc are then added.

It’s been a while between posts.

Work on the layout has been sporadic at best. My order of Auscision Models 442 class locomotives arrived in late February and one entered the weathering shop almost straight away.

Once again, Auscision have excelled themselves with this model. They are a superb runner with excellent detail and equipped with the latest Loksound V5 decoder.

Weathering involved my usual techniques of a black oil wash and Pan Pastels, although this time, the body was nearly exclusively done with the wash, with the pastels used only for highlighting.

I also completed weathering of 4821, which was the dreaded “stuff up” late last year where I mistakenly washed the body in metho prior to weathering. It has turned out pretty good.

I recently made a start on weathering 4821 since I made the dreaded metho stuff up.

I started with an all over black wash and have started to apply some pastels, starting with black on the roof. I think it will turn out OK.

Tried out some weathering on the ballast today.

As mentioned previously, the glued ballast dries a bit too dark, so I’ve gone over it with some grey pan pastels. More rust colour has been re-applied to the rail and onto the ballast to get that rust stained look. Some black also applied between the rails for the oil stains that occur from bogies and traction motors.

A work in progress.

First section of ballast glued down this afternoon.

I am using Chuck’s Ardglen Fine (how appropriate!).

Ballast applied using a spoon, then carefully shaped and spread with a soft brush, being careful to remove any that adheres to the web of the rail. When happy, isopropyl alcohol is sprayed on the ballast, doing a short section at a time. This helps break down the surface tension and aids in the capillary action of the glue.

A mixture of Matte Mod Podge, water and a few drops of detergent is then applied using a small squeeze bottle. It is now left to dry.

The ballast normally dries darker, but it can be lightened up using Pan Pastels. I will also go over the rail colour again with the pastels to blend the rust staining into the ballast. Other weathering will be added later.

I have started back on some scenery work from Chilcott’s Ck bridge towards Kankool.

This has involved preparing the track for ballasting. I recently reshaped the roadbed profile as I wasn’t happy with how it looked. Using a grinding bit in the Dremel, I carefully ground more of an angled shoulder from the end of the sleepers down to the surrounding formation. Once this was complete, I glued some base ‘dirt’ down on the profile shoulders. I then added some colour to the sleepers and rail using Pan Pastels.

In the last photo, you can see the difference where the track has not been coloured.

A few days ago, I learnt a valuable lesson in this hobby. If in doubt, ask the vast knowledge base out there before doing something stupid.

I was prepping another Auscision Models 48 class locomotive for weathering and had decided I would wash the body/footplate in readiness for a dose of Dullcote. For some reason, I had it in my head that methylated spirits would be OK, so I proceeded to apply it with a soft brush, washing it over the body. To my shock, as it dried, it left a white haze everywhere. It had reacted to the paint.

After posting a photo of the results, I was given a few tips to try to resurrect the disaster. The tip that proved successful was to use general purpose thinners applied to the surface sparingly with a microbrush or cotton tip. I think this method essentially has removed some of the paintwork which has in turn removed the haze. As you can see in the photos, there is still some white in areas that were difficult to access, and the paint surface is no longer pristine, but I’m hoping an application of Dullcote and the subsequent weathering will hide this.

Well, it’s been quite a while since my last post, and since then, quite a bit has been achieved.

I have now got CV track and rail laid from the Sydney end of Kankool up to the approximate location of the Up Home signal at Ardglen, which is shown by the red line in the image below.  A total length of around 38 metres (125 feet).  This was achieved over about a six week period.

I continued with the rail laying process as described previously here.

Work has also commenced on the first of the Ardglen turnouts at the Kankool end.

During the last few months, I also spent some time finishing up the weathering on three more 45 class locomotives and the fitting of Loksound Select DCC decoders and sugar cube speakers. 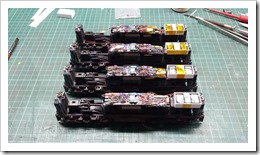 Below are some shots of the weathering on the 45’s.